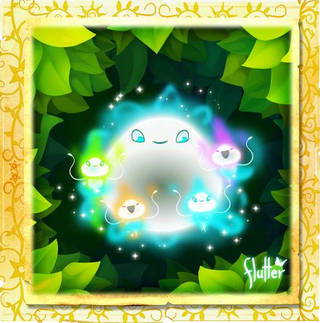 During Wisp Events at first a sleeping Wisp Mother will show up between the leaves next to the incubator and will wake up when the event starts.

To get the needed attraction flowers, you need to catch the wisps, which are released as soon as you tap the Wisp Mother. To catch them, tap the wisp and tap the net icon at the bottom. As they might escape, you also have the possibility to spend

20 for a guaranteed catch or to buy Golden Wisp Nets, which also guarantee the catch. The wisp mother is able to spawn wisps every 2 hours, and the cycle begins when you tap her. The Venus event was the first one during which wisps could emerge from Gifts. Since then this became a regular feature.

Each butterfly requires its own wisp, which will drop a butterfly specific 10% attraction flower. Every event flower fills all three incubator slots (region, rarity and size) at once, so it is not possible and necessary to place rarity and size flowers.

The butterflies of these sets are unlocked one by one. Before they are available, they will be shown with a

Retrieved from "https://flutter-butterfly-sanctuary.fandom.com/wiki/Wisp_Events?oldid=57374"
Community content is available under CC-BY-SA unless otherwise noted.