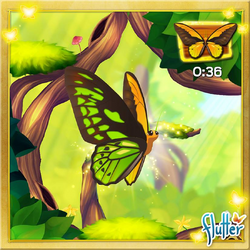 After reaching a Flutterpedia Score of

1,225, from time to time you'll get the possibility to catch up past event butterflies, which will appear for an hour in your forest. Whenever a Special Visitor comes around, you'll get a notification by a banner and there will be a

at the top left corner, which is also showing the remaining time. 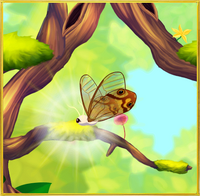 and enlighted by a special glow. They further differ from your butterflies at their banner, which is decorated and colored more noble.

The offer to purchase a Special Visitor – for the twice of the normal egg lay cost – is available for one hour before time runs out and the butterfly leaves the forest. A countdown timer can be seen beneath the icon and at the Special Visitor's details page, which shows up by tapping it first and 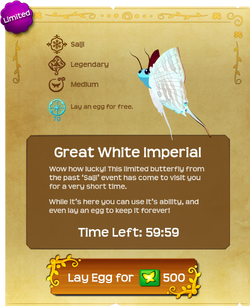 If you decide to keep the Special Visitor in your forest, you need to tap

at the details page. As the butterfly will leave immediately then, you should use the Special Ability – if you want to – before laying the egg.

The waiting time for a new Special Visitor depends on the decision to buy the last one or not: if bought, there should show up a new one after one day, if you let it pass, you'll have to wait four days.

Runaway posted on Facebook on 9th January 2020 stating that on the 12th January will start a new kind of event, Garden Events, which allow people to collect older sets' butterflies. With this event the Special Visitors will cease to appear in the forests.

Retrieved from "https://flutter-butterfly-sanctuary.fandom.com/wiki/Special_Visitor?oldid=57204"
Community content is available under CC-BY-SA unless otherwise noted.