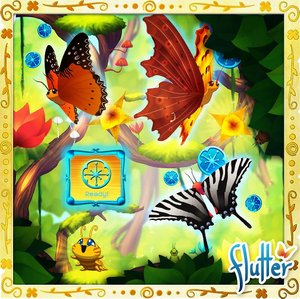 . There are two kind of special abilities: passive and active.

The passive ability adds 5% to the honeydew rate to all butterflies of the same set in the forest. The increased honeydew rate is up all the time – there is no button to activate it – and needs no time to recharge. It is indicated with a recharge rate of zero days (

To use an active ability, you first need to tap a fully levelled butterfly and then the ability button

. If it's an ability, which needs an object to be casted on, there will be a

.
After using the ability the button will change and show the remaining time of the recharging time

. The recharging time can be hurried with Flutterbucks. 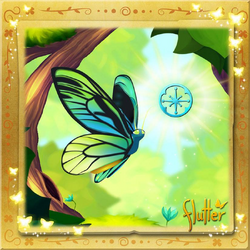 The active abilities can either affect your gameplay, i.e. eggs and raising caterpillars and chrysalises, Attraction Flowers, honeydew earning, creating barkbugs, dandelions, storage resources..., expanding your forest, gifting and double pollen outcome, with a recharging times from 4 hours to 7 days – or just be for decoration with a recharging time of 4 hours.

Some butterflies received an upgraded special ability for completing their set during the time limit. They are easy to discover by their purple

Other Creatures Not only butterflies have Special Abilities, also the Buff-Tailed Bumblebee has an active special ability. It can double the amount of pollen of one shift of one pollen flower every 12 hours. Its ability has the same way to be used like any other active special ability with target.

1 of 3
Retrieved from "https://flutter-butterfly-sanctuary.fandom.com/wiki/Special_Abilities?oldid=56378"
Community content is available under CC-BY-SA unless otherwise noted.