To get pollen from Pollen Flowers, you must choose a shift, which can be hurried with Flutterbucks. 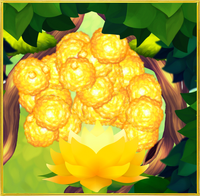 The amount of pollen you can keep in your forest at once is limited to a maximum of 1,000 pollen per Pollen Flower unlocked (irrespective of upgrade level). While it is possible to exceed this cap with the use of the Honeybee, it is not possible to start new shifts until you have fed enough pollen to your butterflies.

In order to start a shift you must have space for the amount the shift produces (without having been doubled by the Honeybee) plus 1. The maximum amount of pollen possible is therefore 9,717, achieved by starting six Honeybee improved "Storm of Pollen" shifts while at 5,661 pollen.

The shorter the shift, the more pollen you will get per honeydew invested. A longer shift will result in more pollen, but at a higher cost. (This table doesn't reflect the usage of one or more Honeybees or the usage of the Special Ability to half the cost of the next pollen flower shift.) 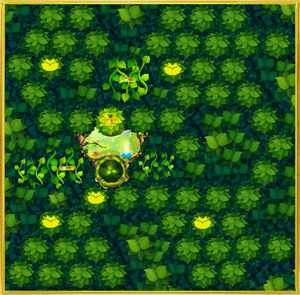 When expanding through the forest occasionally you will find a Pollen Flower spot instead of more space for your butterflies. These spots are fixed and apart from the first two flowers they can be unlocked in any order.

The picture to the right shows the spots where Pollen Flowers can be found.

There are five possible colours for Pollen Flowers. The first flower unlocked is blue and the second is pink, however the colours of the remaining flowers are completely random, so there is no guarantee that all five colours will be present in your forest. It is not possible to influence the starting colour of a Pollen Flower, but it can be changed by using a Special Ability.

In addition to the Buff-Tailed Bumblebee's ability to double the amount of pollen, also some butterflies can influence Pollen Flowers using their Special Ability:

Hurry a Pollen Flower every 24 hours

Change the Color of a Pollen Flower every 5 days