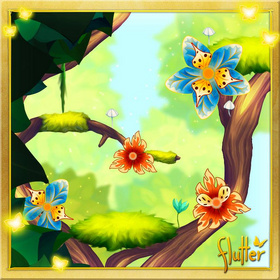 As the latest Butterfly Event type Flower per Butterfly Events – also known as Egg Flower Events at the games FAQ – are a combination of the Set-Flower Events and the Wisp Events. It has specific flowers for each butterfly, which determine region, rarity and size and use all three incubator slots at once, but the flowers can be collected around the Forest, can be obtained from feeding the Strawberry Poison Dart Frog (with a overall 10% chance to get an event flower, which is splitted into the amount of specific event flowers) or even bought at the attraction flowers inventory directly for Flutterbucks.

The butterflies are unlocked one by one and are marked with

in the Flutterpedia until they are available.

Note: because only the event Fantasma took place in 2013 with this kind of Event, it was put together with the 2014 ones.

Retrieved from "https://flutter-butterfly-sanctuary.fandom.com/wiki/Flower_per_Butterfly_Events?oldid=57691"
Community content is available under CC-BY-SA unless otherwise noted.