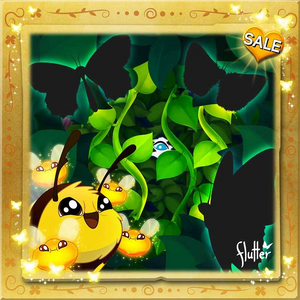 150 is reached, you can participate in Events.

Events can last for a weekend or up to two weeks. There will also be a timer for the length of the event duration in the top left corner of the screen.

Every now and then, there's a event ongoing in your forest. You'll get a notification, when you open your game. It can be a Butterfly Event or an Event not related with a butterfly set. Between two butterfly events, alongside the Facebook Competitions there can be Sale Events and Gameplay Events (seperated or combined), which will usually last for about one weekend each. Some of the events are dedicated to special times and dates of the year. Sometimes they can even happen during the week on special occassions.

The bigger Butterfly Events bring new species and Event Exclusive Rewards to your forest and are divided into three kind of events:

The amount of honeydew all butterflies produce is doubled during this time. On Flutter's Birthday it's even tripled.

These weekends mean, you can switch between Missions for half price and they will also be done in the half of the time.

On weekends like this all Special Abilities are ready to use after the half of usual recharging time. Even the Buff-Tailed Bumblebee is affected!

An event weekend that halves the incubation time of your eggs OR enables Caterpillars' and Chrysalis' to feed or grow twice as fast.

An event weekend where it costs half of the normal price to lay an egg.

Whenever it's time for a Visiting Butterfly Bonanza the frequency of Special Visitor is turned down to an hour, which means a new butterfly from past events comes around every 60 minutes to be bought with

and/or you can use it's Special Ability.

Garden Events
From January 2020 was introduced Garden Events that take place of the Special Visitor and Butterfly Bonanza.

Doubled Offer Wall and Video Snail Rewards
During this weekends all rewards you get from the offer wall or from the Florida Tree Snail by doing some tasks like watching videos are raised by 100%.

During this weekends all Pollen Flowers produce twice as much as usually.

Game Play Events are usually companied by some Sales, but they can come around independently from each other. By now there had been five kind of sales, which can come around combined: Buff-Tailed Bumblebee, any kind of core Attraction Flowers or Strawberry Poison Dart Frog treats and delicacies for Half Price, Forest Expansions or Storage Items for 20% to 50% off.

Yes its possible to sell a event butterfly because since you have it in your flutterpedia you will be able where before the share button was to lay an egg for flutterbucks.

Here you'll find the time line for the past events of any kind.