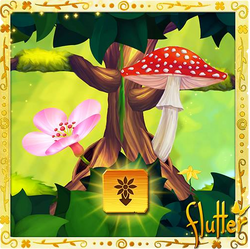 An astounding assortment of flora and fungi that brighten the forest. 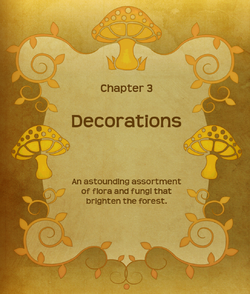 Every Set and Mission Group provides at least two Decorations: A common and a deluxe version of it. The common one will be awarded by having every butterfly hatched and raised respectively by having all missions of one group done at least once, the deluxe one as soon as all butterflies of one set are raised to max level respectively all mission of a group are fully done.
All sets from Nawab to Cracker also included a third, exclusive, animated version, which was awarded if the set was completed during the event's time limit. Already unlocked and earned Decorations are also collected in the Flutterpedia. With unlocking the deluxe version, also the description gets unlocked in the Flutterpedia section of the Decoration. 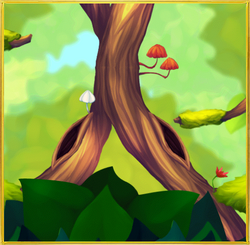 To place a Decoration in the forest, search for a decoration spot, which looks like a knothole and tap it. This will open the Decoration Menu with the option to place

, if it's an empty slot, to remove

Decorations, if the slot is already in use. Decorations with a darkened background are already placed. Decorations can't be bought or sold.

Retrieved from "https://flutter-butterfly-sanctuary.fandom.com/wiki/Decorations?oldid=56227"
Community content is available under CC-BY-SA unless otherwise noted.