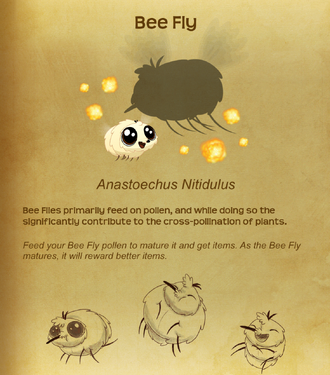 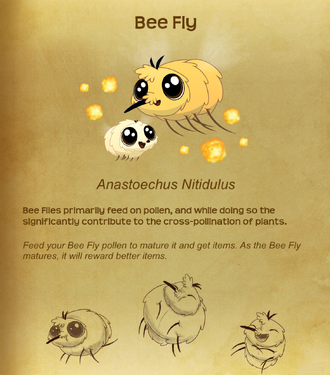 Scientific Name: Anastoechus Nitidulus
Description: Bee Flies primarily feed on pollen, and while doing so they significantly contribute to the cross-pollination of plants.

Feed your Bee Fly pollen to mature it and get items. As the Bee Fly matures, it will reward better items. 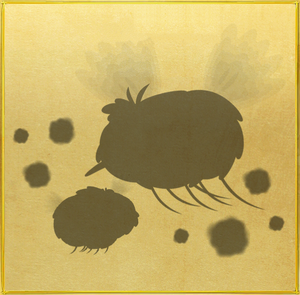 UnlockedUnlocked – AdultAdult
Description not unlocked: Reach a score of 1700 to unlock.

The Bee Fly is unlocked by reaching a Flutterpedia Score of

Feed it with pollen until it puffs up, then tap it and it will 'explode' to give you presents like Attraction Flowers (10% as Baby, Young and Teen Bee Fly, 20% as Adult Bee Fly), Storage items or frog treats. Further it's the only source for Paradise Attraction Flowers. It can be fed unlimited times as soon as it's grown up. 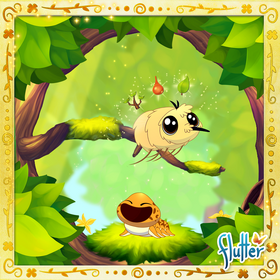 The Bee Fly has a big range of possible give-aways, from Flutterbucks over Storage Items to Attraction Flowers of almost any kind:

The only things you won't get from it are Frog Delicacies, Saltar, Amigo and Event Attraction Flowers. 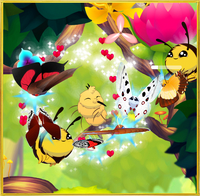 The following butterflies have Special Abilities to interact with the Bee Fly:

1 of 3
Retrieved from "https://flutter-butterfly-sanctuary.fandom.com/wiki/Bee_Fly?oldid=52909"
Community content is available under CC-BY-SA unless otherwise noted.